“Now you’re able to add professional-quality, slow motion replay at a fraction of the cost of what it used to be.” - John Mitchell, Director of Audio Visual at TD Garden. 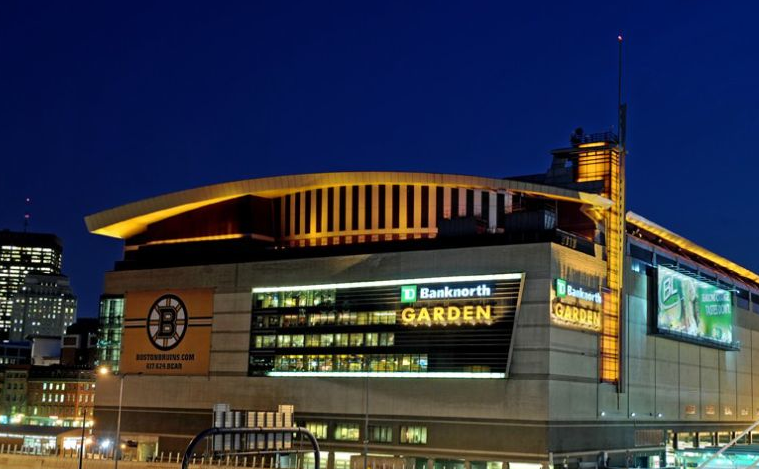 With on-ice action as compelling as it’s been, the hurdle for TD Garden’s audio-video department is to deliver something extraordinary that makes actually being at the arena for a game, even more special.

“The top challenge we face at the Garden is how do we enhance the experience of the fans who attend a game, so that they not only see all of the game action live, but also the highlights and key plays on video. We want to create an overall experience that makes the price of their ticket a great value and leaves them wanting to return again,” says John Mitchell, director of audio-video at TD Garden.

Fortunately for Mitchell and the 35-person staff he manages, this task is made much easier thanks to an impressive, multimillion dollar scoreboard with giant, integrated HD LED displays and a bevy of high-tech, HD video production gear that make it possible for fans to view slow-motion replays, regardless of where they are sitting. 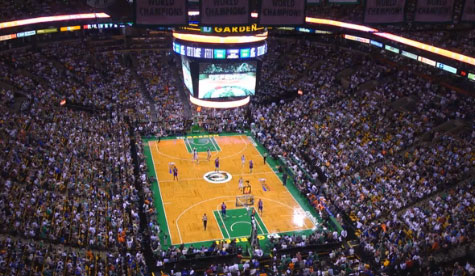 For this season’s play, TD Garden added two NewTek 3Play replay systems, taking the number of different camera shots available for instant replay to 11. With so many angles covered, the LED screen coverage has never been better. “Thanks to the 3Play systems, close overhead goal cameras - which we’ve never before had- and in-net cameras, we are able to bring up multiple replays from various angles that give fans in the Garden an incredible view of the action.”

Before adding the two NewTek 3Play systems, Mitchell’s department relied on a more-expensive legacy device that only allowed his productions to integrate replays of three camera angles into the scoreboard presentation. 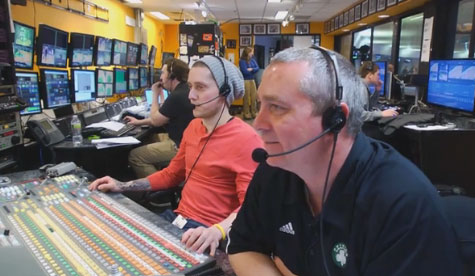 The additional eight replay angles have a direct impact on the quality of Mitchell’s productions. “It might be that during one portion of a play one angle is better, and during another portion another is better,” explains Mitchell. “So, it really enhances our presentation of the action. It really takes the value of our control room and our investment and enhances it.”

Beyond production quality, having so many new replay angles means fans directly benefit from a perspective on the game that can exceed even that of game officials. “We actually had a game that went to overtime,” recalls Mitchell. “With one of these new looks, we showed on replay from an overhead camera that the puck clearly went in the net by the time the ref had gone to the penalty box to review the shot. The game was over, and the fans were able to see it. If it was last year, and we didn’t have the 3Plays, they wouldn’t have been able to see that it was a game-winning goal.”

It’s more than the game

While TD Garden’s new NewTek 3Play replay systems have expanded an important element of the Bruins scoreboard coverage, their value extends to well beyond game night. Even while the 3Play systems are recording and playing back different angles for fans in attendance, Mitchell is laying the groundwork for the next day’s production of promos and other video projects based on that night’s action. 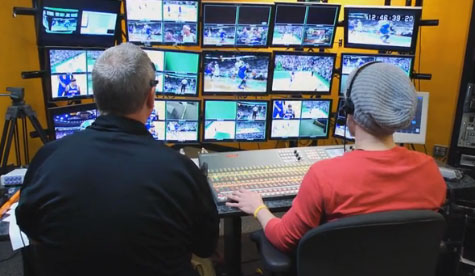 Between periods, the audio-video department tags all shots being recorded with a special naming convention that identifies team, player involved, what the player did to make the shot worth recording in the first place, the camera angle used to record the action, the opposing team played and the date of the game. With such an extensive metadata collection, doing queries of recorded angles that turn up the desired shot is quick and easy.

At the end of the game, the 3Play allows Mitchell to begin moving all of the recorded angles with their associated metadata across his computer network to be downloaded to video servers for easy access the next day. “It literally takes five minutes after the game, and I am done,” he says.

“I come in in the morning, and it is just sitting there on the network,” explains Mitchell. “We just put them in individual directories. We’ll have 11 looks at every goal, maybe eight, if three didn’t have it. And we are putting that in the directory devoted to that player who made the goal.” With every shot organized and stored, Mitchell’s Final Cut Pro editors can easily find the clips they need, download them and begin editing. 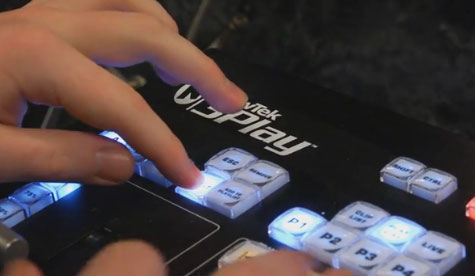 “Remember, the big cost is labor, not equipment,” counsels Mitchell. “Because labor is so expensive, doing as much as you can live makes a lot of sense. You can do something live in one-thirtieth of the time it would take to post.”

To illustrate his point, Mitchell says it takes about 30 hours of source video to post one hour of finished, professional video. “But if you do it live with an hour or two of pre-prep and are able to do all the CGs and graphics and cut everything live, do double-box effects and do it all live and record everything in HD with ISO channels, it’s like showing up at nine, and you’re done at 9:30, instead of working till five, and you did the same amount of work.”

“With labor, health care and 401k retirement plan costs associated with each hour needed to post a project, anything that can be done to save time saves lots of money in the long run,” he adds.

Production technologies such as NewTek 3Play replay systems and TriCaster video production systems produce dramatic savings up front. “The equipment we use is one-fifth to one-eighth of the cost of what was spent before,” explains Mitchell, which he adds is having a ripple effect beyond TD Garden. “This kind of affordability is even allowing colleges and high schools to deploy the same exact workflow that we are using at the major league level.”

What this means for video operations with regular, recurring events to cover is unprecedented in terms of what they can afford and how they operate, especially when considered on a longer time frame.

“We are going to use the equipment over the next decade. If we amortize that over 10 years, the cost is miniscule compared to the value of the assets we will be capturing and producing,” he says.

“Whereas before it was a quarter million, that’s tough for many organizations to handle. But if it’s $20,000, it’s a lot easier to get by. If you amortize that, after the tax write-off and the 10-year amortization, you are looking at a thousand or two a year, which is ridiculous for the benefit you are getting out of it,” explains Mitchell. 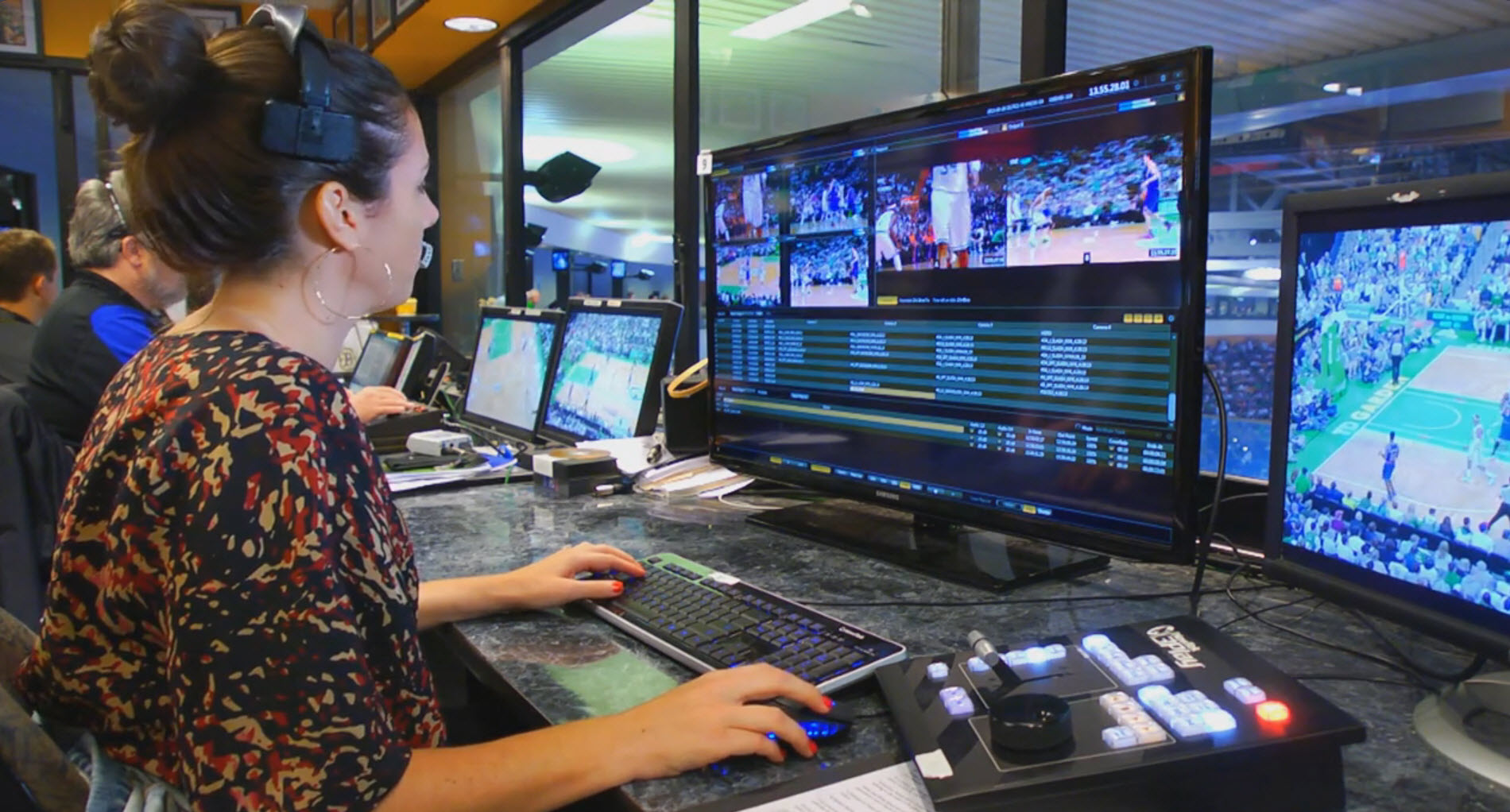 At the same time, the cost of equipment has been falling and production power has increased, another important technological development is favorably impacting operating expenses. According to Mitchell, developments like the NewTek TriCaster video production solution and its professional control surface, as well as the easy-to-use 3Play and controller, are two clear examples of how technology can simplify operations.

Simpler operation means video operations like the one at TD Garden don’t need a video engineer or seasoned technical director to understand and operate traditionally complex pieces of gear that are the focal point of live video production.

“In addition to being cost-effective overall, you don’t need a guy like me, an engineer, to make it all work,” Mitchell says of today’s easy-to-use technology. “You don’t have to worry about sync and genlock with all of these cameras. You don’t need a six-figure engineer on staff.”

Not too many years ago, there was a clear line of demarcation between the video production capabilities of in-house facilities, like those at TD Garden, and those of the mobile video production trucks that roll in to cover games for a television audience. The line separating the two was largely defined by the cost of the technology used and the size of budget of each.

However, that’s all changing thanks to video production equipment like NewTek 3Play and TriCaster. “This new technology has allowed us to do what is being done in the big trucks, whereas before we couldn’t,” says Mitchell. By giving TD Garden access to the same production functionality that was once unreachable for video operations with limited budgets, the end result is indistinguishable from broadcast coverage.

That’s particularly important in an era when high-definition television displays game action at home, as clearly as anything a fan would see in person at the arena. By enhancing the in-arena fan experience with the same sorts of replays and other production effects fans see on their HDTV sets, Mitchell’s operation gives them an added incentive to keep coming back to TD Garden for the in-person game experience. 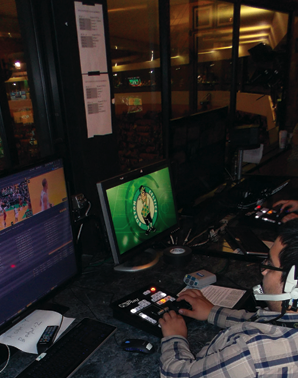 “Entertainment acts offer a new revenue source for us,” says Mitchell. “KISS 108, the Clear Channel station out here, is doing Web shows before the concerts they are promoting. They make money selling sponsorships for the Web show. We can also generate revenue during bumper graphics, just like on TV.”

Every year, some 1.5 million Bruins and Celtics fans passing through the gates of TD Garden have a chance to take a second or even third look at critical game action thanks to Mitchell and his NewTek 3Play slow-motion, instant replay systems.

While the impact those replay angles have on the overall fan experience is significant, it may actually be dwarfed by the effect this technology has at TD Garden as it ripples out to touch overall video production workflow, budgets, staffing requirements and even available business opportunities.

Video production technology like NewTek 3Play and TriCaster helps video operations like Mitchell’s to operate more efficiently, while producing a video product that is every bit as compelling and engaging as anything produced by a broadcast production truck. What’s remarkable is now non-broadcast video operations can actually afford to take on this level of production and succeed.

“You can get the same workflow with NewTek TriCaster and 3Play and Black Magic Design routers and DAs that only a few years ago cost $2 million to $4 million for about $100,000 to $150,000,” says Mitchell.

“There is really a paradigm shift that’s happening. You no longer need the TV truck to do a broadcast. A major broadcast normally costs between $20,000 and $30,000 to put on, and a big chunk of that is the high-definition truck that can cost $10,000 to $12,000 per night,” he explains. “The TriCaster and 3Play combination means you don’t have to rent that truck, and together they are bringing down the cost of doing that broadcast to 20 percent of what it was before.”