Building a Virtual Studio for an Interactive Game Show

In early 2012, they partnered with paraMedia and Telepictures to bring a revised concept for the game show Let’s Ask America – during which four contestants competed while answering questions from their homes via Skype – to living rooms in EW Scripps Company markets across the country. Scripps had been looking to replace costly syndicated shows, such as Wheel of Fortune and Jeopardy, on its ABC affiliates with less-expensive homegrown programming. A pilot was made and tested well, and soon was picked up for 170 episodes.

Created within a rented traditional studio environment with a physical set, live audience, and high-end equipment, the show incorporated the interactive Skype concept but was live to tape, negating the need for some of the technical solutions the trio had been working on to support their novel show concepts. 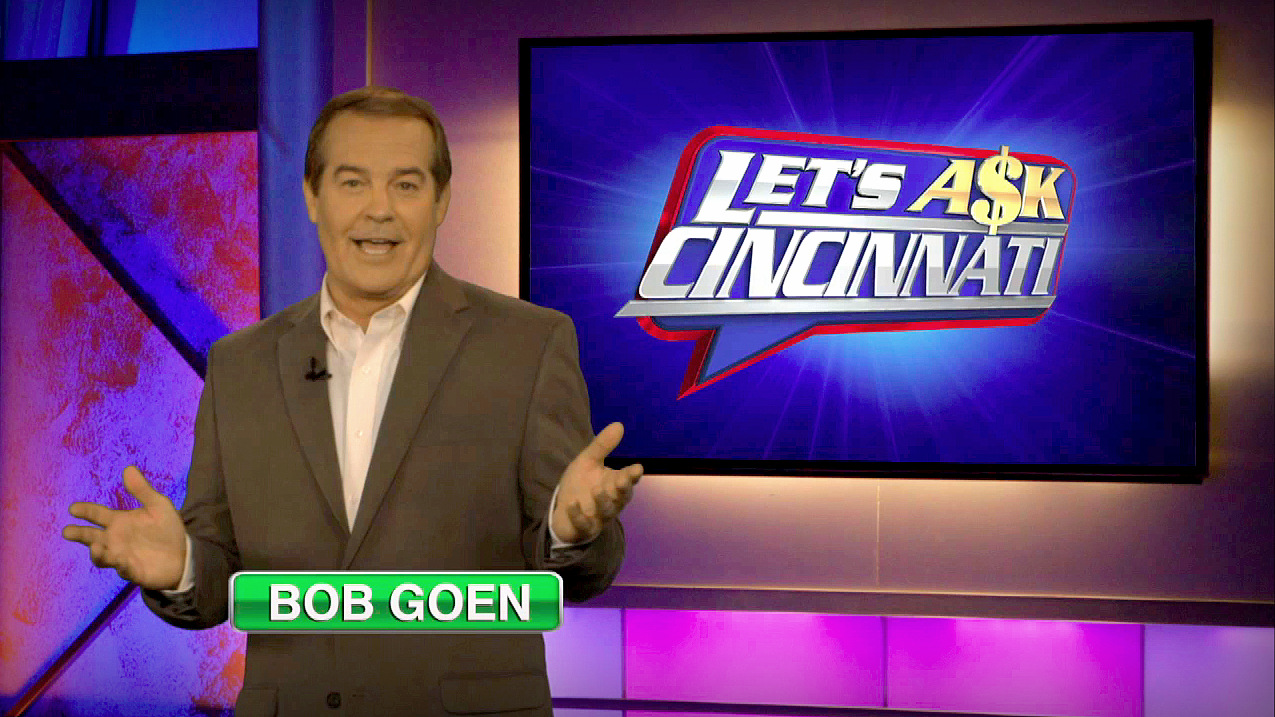 Still determined to pursue their dream of true live, interactive content, Green, Betts, and Stevens opened WebCam Riot! Studios and pitched their Let’s Ask America partners on a localized, interactive, play-along version of the show. They received another green light, this time for four special episodes, which became the spin-off called Let’s Ask Cincinnati. It featured local players, locally-focused questions, and a local host, as well as the addition of viewer participation made possible by streaming a simultaneous interactive version of the show as the taped version was televised.

Like contestants on the show, they were presented with an all-important question: How could they create the project on a restricted budget, since production at the practical studio required an extensive crew and was very costly? Green and his group had an answer: They would replicate the practical studio environment using virtual sets, use a cost-effective workflow, and add an interactive element once each episode was locked. 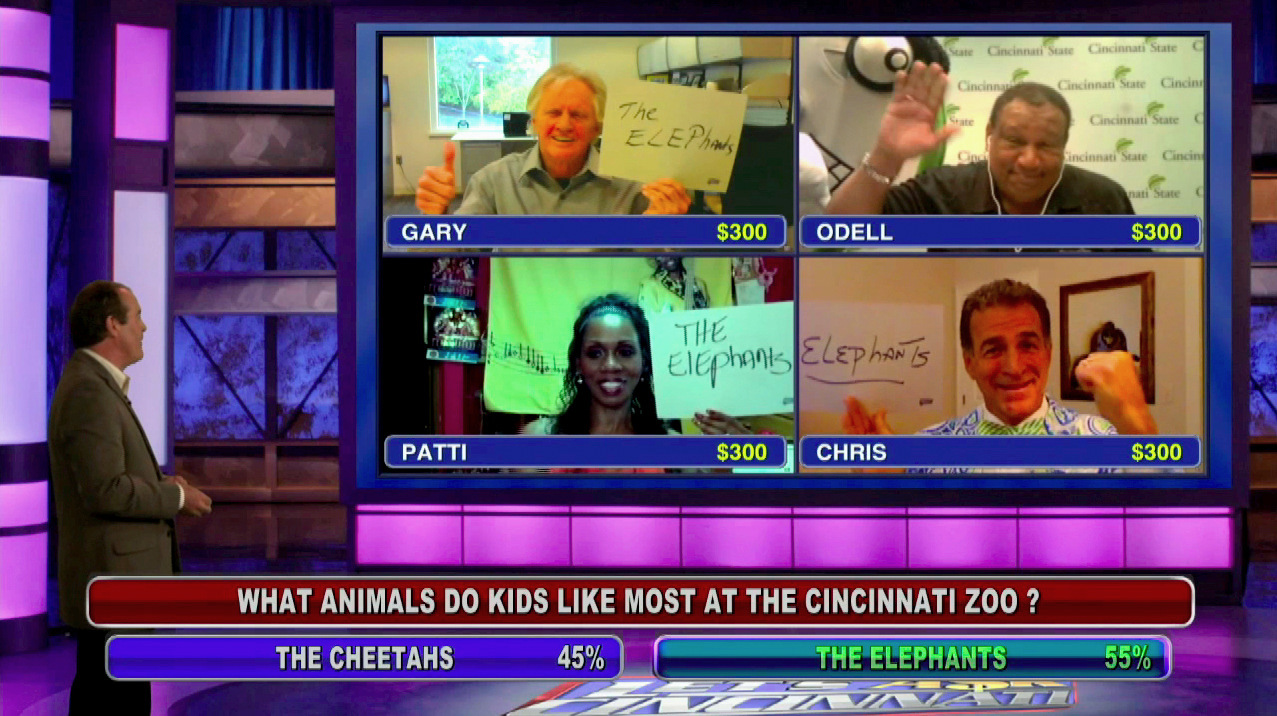 While building the studio, the group focused on maximizing efficiency in all areas in an effort to keep facility costs as well as the subsequent production costs at a minimum. At the heart of the setup is a NewTek TriCaster 460, which offered an affordable, scalable, and reliable multi-camera virtual set system. A TriCaster 300 provides redundancy and downstream abilities. In addition, the studio contains Extron AV routers; a variety of Blackmagic Design hardware, including cameras, routers, and SSD recorders; AJA encoders and converters; Yamaha mixers; teleprompters; Telex RTS systems; and more. A large greenscreen and DMX iPad controlled lighting grid are also installed.

The three partners consider themselves early adopters of new, revolutionary, and democratizing technologies. When they started their own business several years ago, they followed that same path in getting their tech start-up and interactive content development studio up and running.

“Drawing on our extensive experience in the studio as professional video engineers, directors, and producers, and working on countless prime-time TV shows and blockbuster feature films, we realized we had the technical wherewithal to build our own professional multi-camera studio at a fraction of what it ‘should’ cost,” says Green.

The trio’s drive for unique interactive show ideas and the required technology to support them dates back to 2009, when they set up a technology incubator to test some interactive concepts for live Web shows. “We spent a good amount of time figuring out how to incorporate multiple Skype feeds into a traditional multi-camera show,” says Green. “After conquering audio and video delays, and streaming and bandwidth issues, we created a few entertaining and compelling show formats – such as live, interactive talk shows and game shows.”

After getting interest from their sizzle reel, created at the incubator space, the group scored a deal that led to three seasons of Let’s Ask America. Contrary to the original concept, however, it was a live-to-tape show ­– the Skype callers were pulled in live at the studio, and there was a live, traditional audience, but the show was prerecorded, without any live, online interaction. It was also produced using the studio’s high-end equipment.

Soon the partners faced another difficult question: How do they mimic the traditional, practical studio set environment virtually, so that Let’s Ask Cincinnati would have the same look and feel of its national counterpart but at a fraction of the production costs? And, how would they incorporate the new interactive aspect? The answers were found inside their new studio, with the right combination of equipment and workflow.

“We put together a plan on how to best accomplish this, and brought one of our RED Epic Dragon 6K digital cinema cameras over to [the practical studio] to shoot the shiny-floored game show set while it was all lit up, from all the same angles that we used within the traditional show,” explains Green. 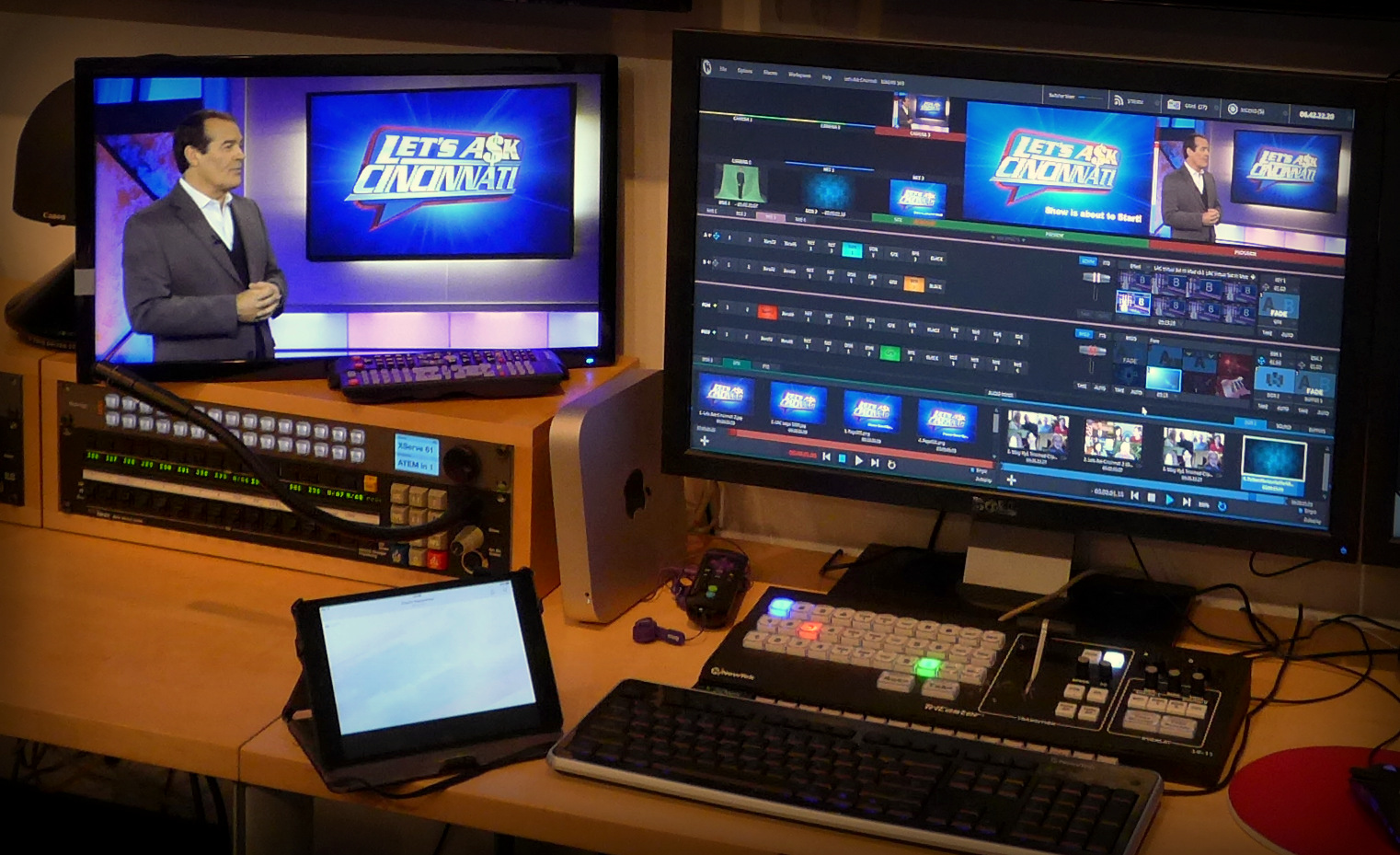 They then imported those images into the TriCaster 460 using the Virtual Set Editor feature, to re-create the space digitally. With Adobe’s Photoshop, they repainted the virtual floor with the revised Let’s Ask… moniker, replacing “America” with “Cincinnati.”

“We were able to completely re-create the set and match each angle to our studio cameras. After adjusting some monitors for the host [to match eyelines] and tweaking the lighting, it was a perfect match,” says Green. “Our colleagues were impressed with how much it looked like the original show, and here we were doing it for a fraction of the cost on a set that was ten times smaller.”

To accommodate the virtual imagery, the team installed a 30-foot greenscreen. “The host is sort of static with his movements, so we can make a much larger picture around him with a garbage matte,” explains Green.

In addition, the small crew color-corrected the imagery of the video signals containing the four Skype contestants (who appeared on the virtual projection screen), to make them appear less “perfect,” to more closely resemble the look of the projection screen of the practical Let’s Ask America set. Subtle virtual camera moves also helped sell the look.

With the setup ready, the Let’s Ask Cincinnati host, Bob Goen, arrived at WebCam Riot! Studios, where four shows were recorded in one day. Four contestants for each show were connected via Skype, and the performances were recorded live to tape, just as they were for the national show. 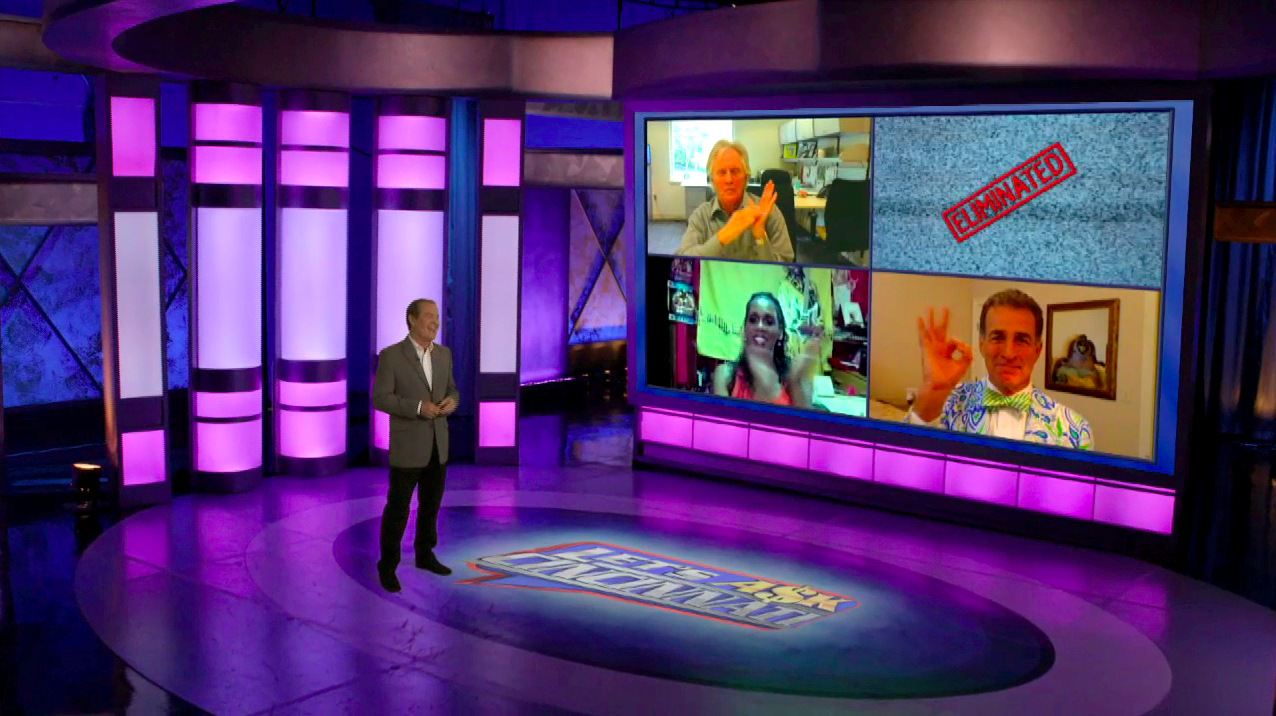 An assortment of Apple Xserve servers handled the incoming Skype sources, which were fed to a quad-split window on the virtual projection screen. That split was then fed into the TriCaster 460 through Input 4. The host and greenscreen, meanwhile, were shot with Blackmagic Studio cameras.

After shooting and completing postproduction on the four episodes, the group added the interactive element using a custom software platform they helped develop. This allowed viewers to play along by clicking on their computer screen. 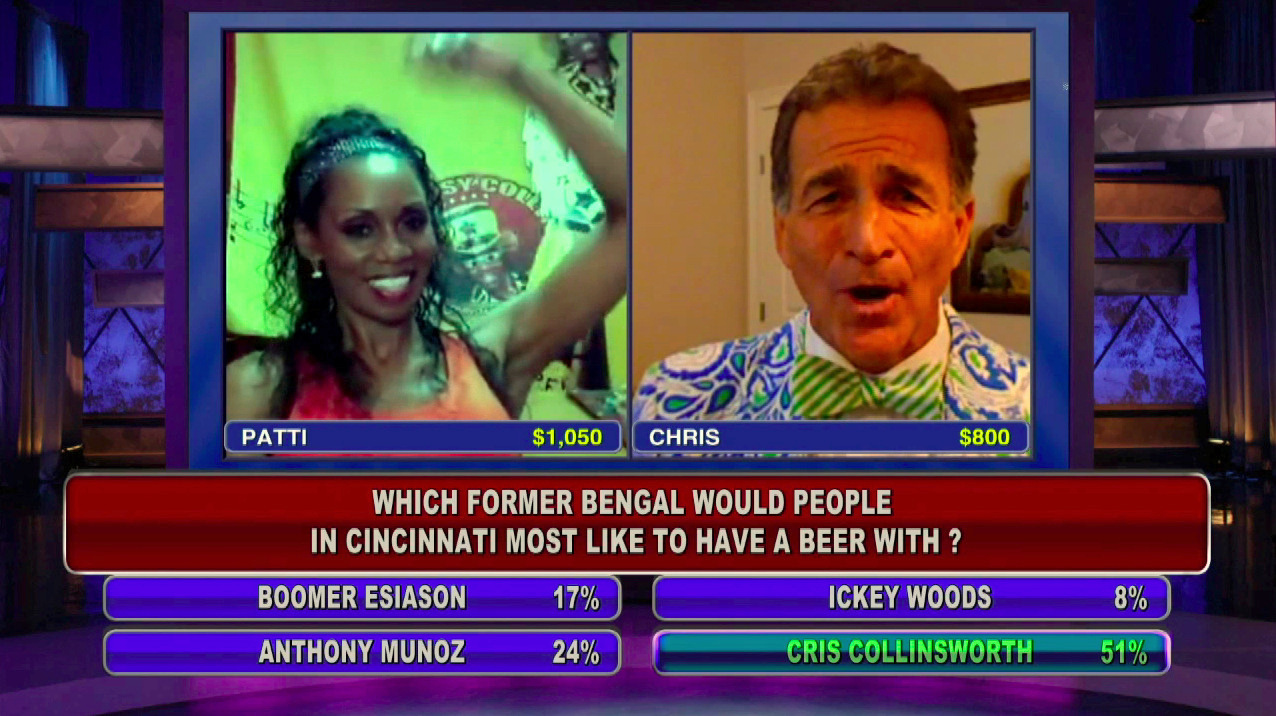 Let’s Ask Cincinnati was broadcast on WCPO (ABC) Channel 9 in Cincinnati. On air day, WCPO started the prerecorded broadcast in Ohio, and the live stream was simulcast from the studio in California for the play-along contestants. “We could have streamed from anywhere; we just needed a computer with Final Cut to play back the encoded videos and the interactive platform,” Green says. As he explains, the Final Cut output was fed to the TriCaster for final effects, transitions, and so forth during the live event, and then sent to an encoding computer running Telestream’s Wirecast software, which streamed to the WCPO website.

Let’s Ask Cincinnati actually pre-empted the national show in the same time slot. “It was exactly what we were hoping to prove: that localized content and contestants (as well as having a local celebrity host) was much more engaging and compelling to the local demographic,” says Green. “Also, by re-creating the show at a fraction of the cost, yet maintaining very high production value by using TriCaster and other cost-effective gear, we now have a model for success that will help pave the way for future business. We believe this is the future of localized content.”

Let’s Ask America ran three full seasons with a total of 490 episodes, and went to syndication on the Game Show Network.

Presently, Green, Betts, and Stevens are transforming WebCam Riot! Studios into a rental facility. “We used it as an incubator for the first year and a half, with the show helping to sustain it. Now we are building it out like a transitional rental facility and have some clients who are producing their own content,” says Green.

As for the WebCam Riot! partners themselves, they are working on a tech review show and a Web series. “We want to keep developing our own content, both interactive and non-interactive,” says Green. “We feel [the studio] can handle pretty much anything we come up with.” 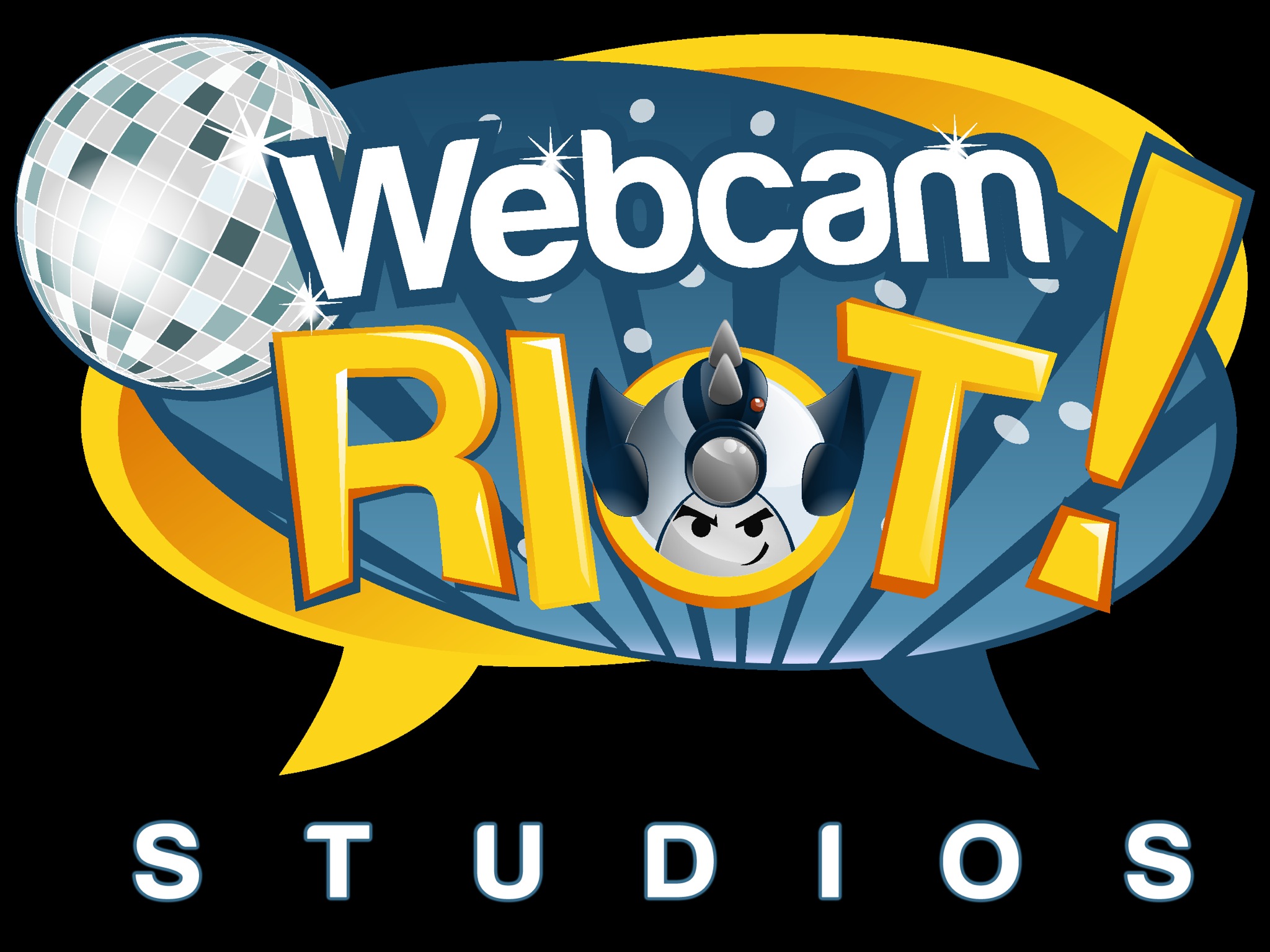 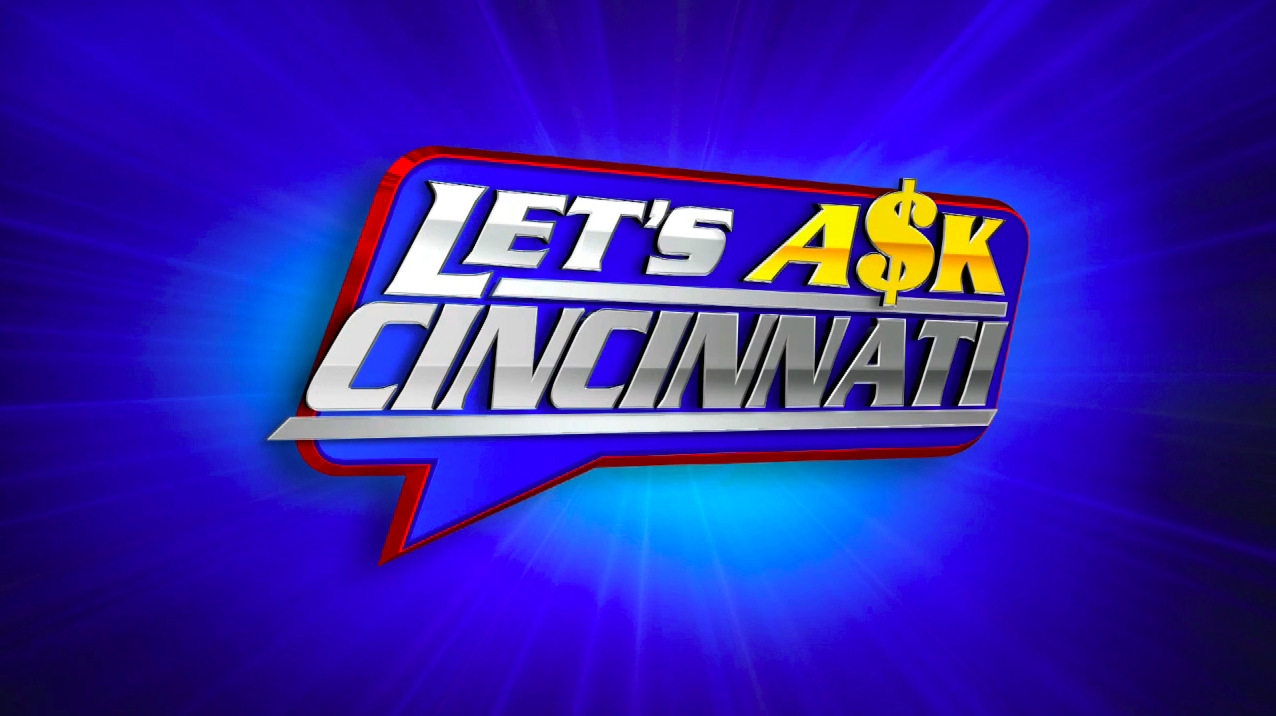 How Mustard TV Makes Great Local Television on a Budget 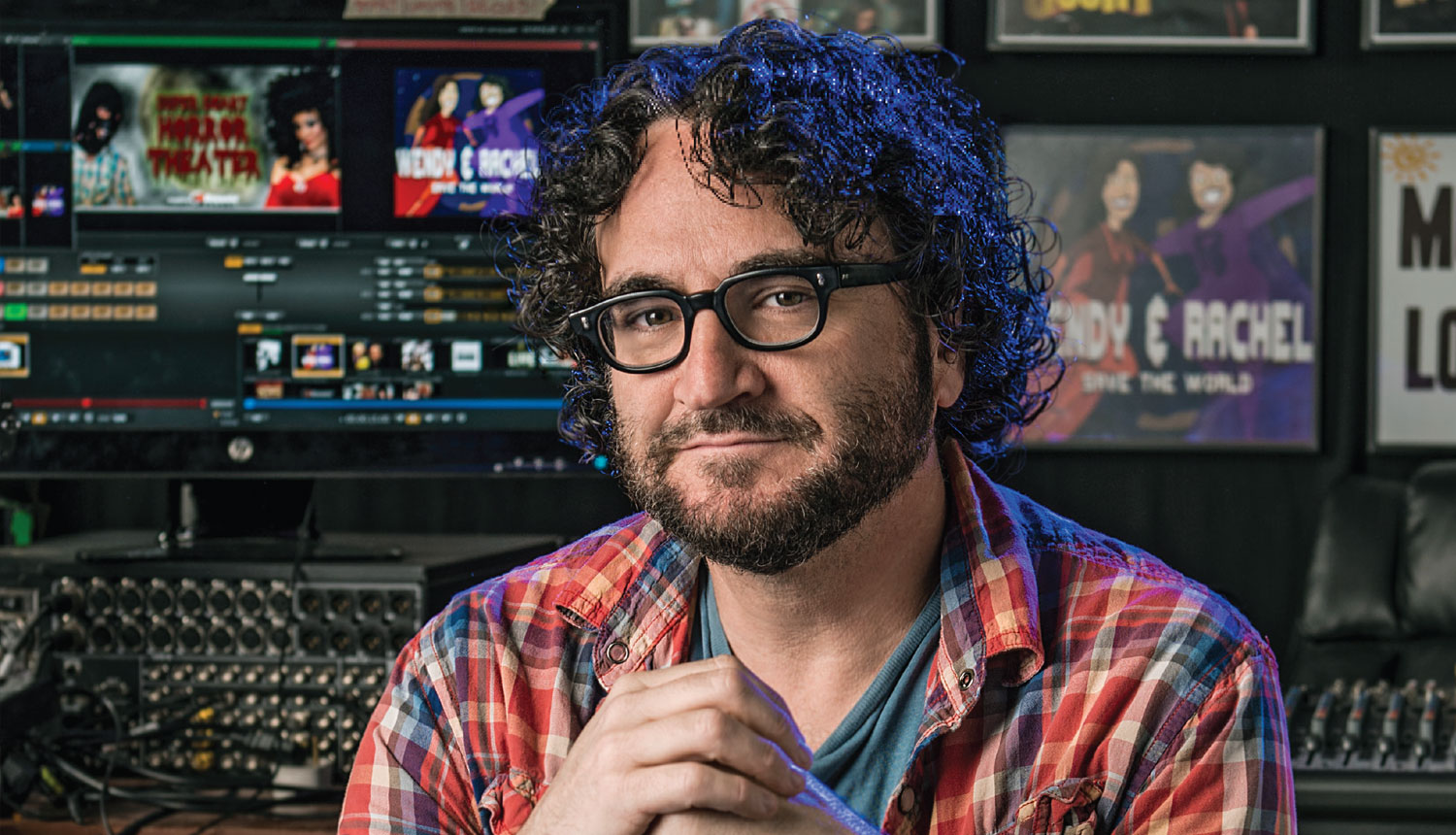